The Woodcreek SeaWolves is a competitive summer recreational swim team composed of approximately 200 - 240 members aged 5 to 18 years old. The SeaWolves is a program of the California Capital Aquatics and participates in the Northern California Swim League. The SeaWolves have a parent committee that acts as liaisons between the swimmers, the families, the coaches, and the City of Roseville.  The leadership committee facilitate and organize the swim meets and the numerous activities not run by the coaching staff.

Practices are held at the Roseville Aquatics Complex, located at 3051 Woodcreek Oaks Blvd. The swim season runs from April through July.

To provide the best swim experience to both our swimmers and families. With a top notch facility, a great coaching staff, fantastic swimmers, and a lot of volunteers we work to excel at swimming while still remembering to have as much fun as possible.

In 1995, the City of Roseville Parks and Recreation Department constructed a new aquatic facility in northwest Roseville. With the great popularity of competitive swimming in the Roseville area, the Parks and Recreation Department, in conjunction with California Capital Aquatics, began a new recreational swim program in the Spring of the same year. The team adopted the name Seawolves and chose the wolf as their team mascot. In its inaugural year, the team created a slogan as a way for swimmers throughout the league to identify a Seawolf. The slogan read, appropriately, The Legend Begins...

The Seawolves had 171 swimmers in their first year.

Under the leadership of Shelley MacLeane, the team finished fourth at the League Championship meet in 1995 and 1996. In 1997 the team grew to 200 and with Head Coach Karen LeFebre, the team moved up in League ranking by finishing third at Championships. In 1999, under Coach Jana Hawkin’s guidance, the Seawolves were one of the top teams in contention for the VFCAL championship every year. When Chuck Neep took the reigns of the Seawolves, he led them to back-to-back-to-back VFCAL championships in 2006, 2007 and 2008. In 2009 the Seawolves left VFCAL for the new and expanding NORCAL Swim League and competed in the newly realigned Comstock Conference. In 2012, the Seawolves began competing in the Gold Rush Conference of the Norcal League with Coach Nick Pointer at the helm. In 2015, Coach Beth Gardner took charge as Head Coach. In 2017, Alisha Blatter became Head Coach. She grew up being a Seawolf and has been involved with coaching the Seawolves since 2007. Alisha has victory as a goal for the Seawolves now competing in the Eureka Conference… and, of course having lots of fun along the way!

Become part of the legend... 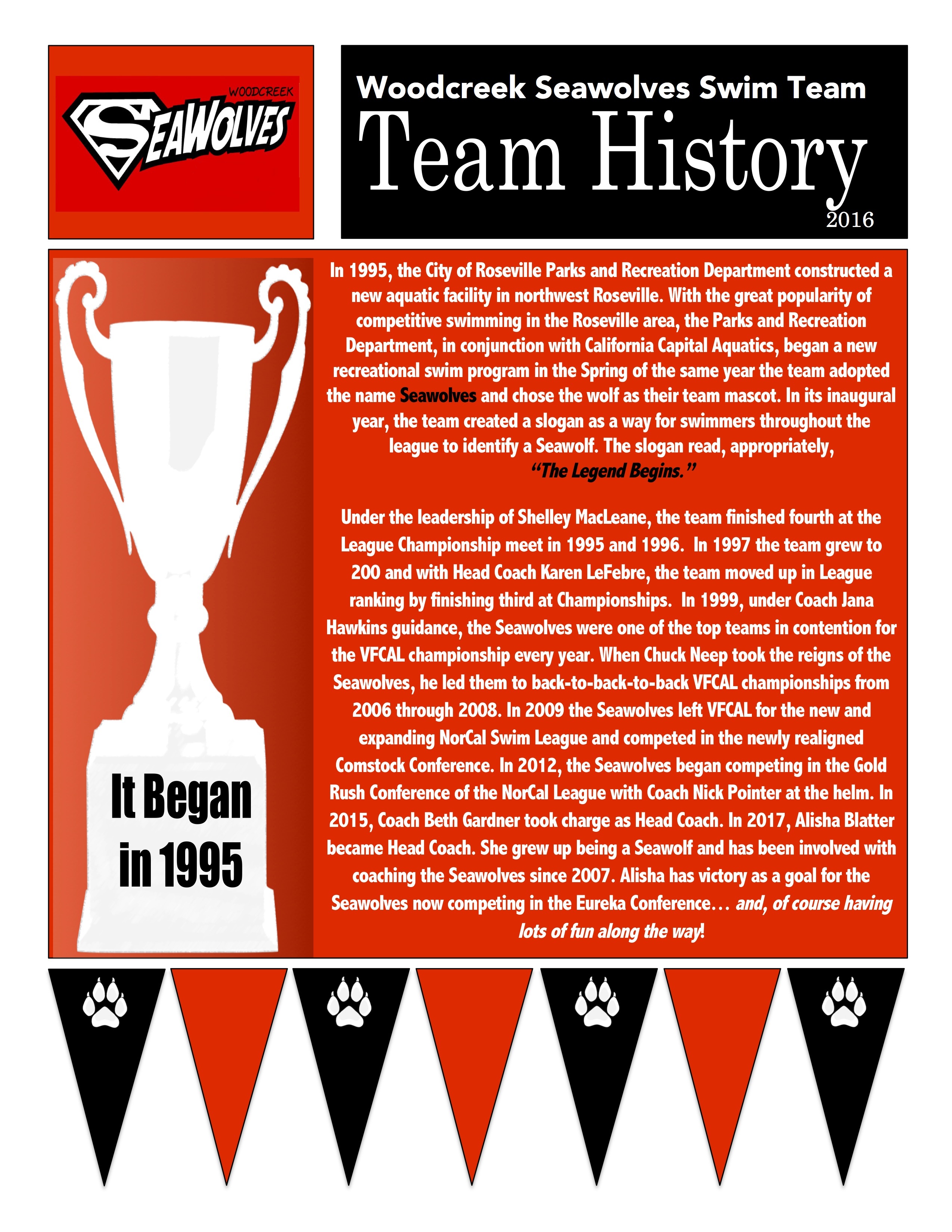 Image
Upload and embed an image

View all
Recent News
List of of recent news posts

Are you having problems logging in to your account?  Please email webmaster@woodcreekseawolves.com.